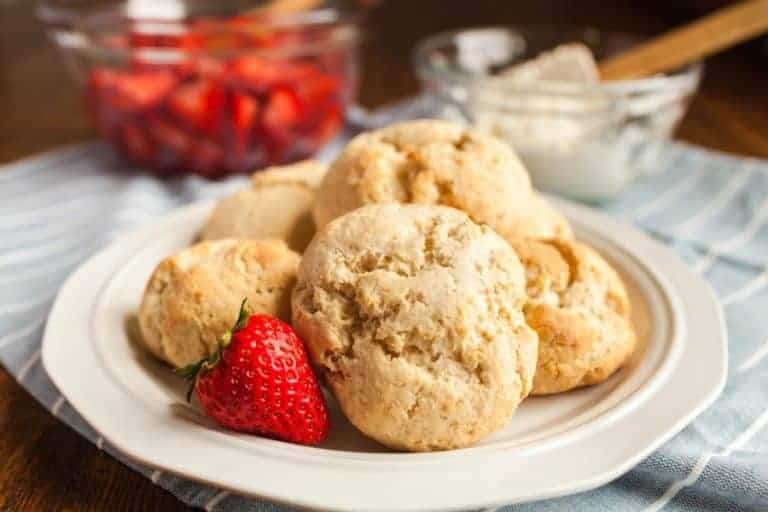 There’s nothing like homemade pancakes to please the kids or indulge yourself. But just how long has that Bisquick been in the cupboard?

Bisquick prints a “best if used by” date on the package. Because the product is dry, powdered, and sealed in plastic, the chances are high that it will be good well beyond the suggested use date. If it’s still sealed, you have little worry. In any event, inspect it thoroughly before eating.

If your Bisquick is past the suggested use date, don’t fret. It’s probably fine. Here, we’ll talk about how to know for sure and what to do if confidence eludes you.

How Long is Bisquick Good for After Expiration Date?

As you may or may not know, Bisquick is more than just all-purpose flour. It contains all the ingredients you should need to make delicious, fluffy pancakes or biscuits. In addition to plain, natural flour, Bisquick also contains oil, leavening, and salt. The salt will not spoil; in fact, it will make the entire mixture less prone to spoiling. The oil and leavening used in Bisquick will are the ingredients you can expect to deteriorate over time. However, Bisquick is formulated to last for a long time.

The oil will last for up to 10 years when the package is in its sealed state under optimal conditions in a very cool and dry space that is well insulated. It will last 2 to three years if kept in a cool, dry, clean environment after having been opened. The leavening is a different matter. Leavening is an agent that triggers fermentation making your pancakes fluffy with all those bubbles inside that absorb syrup and butter so nicely.

If your Bisquick does go bad, it will be some combination of the leavening and the oil.

The recipe for Bisquick was invented in the early 1930s by Carl Smith, a sales executive for General Mills. The inspiration for the recipe was some biscuits he enjoyed on a train ride from the east coast to San Francisco. He asked the cook how they were made and was given a simple recipe using flour, baking powder, salt, and lard. The lard used on the biscuit recipe had to be frozen before use, which was a big task on a train back then. So that tells you that Smith had a lot of financial resources at his disposal, or at least, General Mills did.

Smith pitched the idea to the company at the earliest opportunity. The executives liked the idea of mass-producing biscuits like ones that they too had enjoyed on long train rides. But for the product to be a commercial success, it had to have a long shelf life. For that, some high-ranking company chemists would have to step into the kitchen.

The result was presented to the public in 1931 and has been a best seller for nearly a century. Part of the reason for its great success was its enormous shelf life. The dry mixture is so stable, far more durable than just about anything they had at the time. The consensus among cooks and survival food storage fans is that your Bisquick will last on average for five years if it is still in the package, with the sealed, plastic bag undamaged and unopened.

If, on the other hand, you have opened it, put it away, and rediscovered it some years after the kids have left home and purchased packages of Bisquick for their own homes, then you’ve got some digging to do.

In all seriousness, once the package has been opened, in my experience, it will only last a year at most. When I have stored opened packages of Bisquick, it was stored in a relatively cool and dry cupboard, but we live in a humid, swampy location, gets very cold in the winter and very hot in the summer. If you live in a dryer climate with a, let’s say, less fetid air quality, your stored, opened Bisquick may last as long as two years.

The limiting factors for this food product are the soybean and cottonseed oils it contains. While minuscule, these include fat that will attract microbes, bugs, and other unpleasant vermin.

So, the consensus among those who know is that Bisquick’s shelf life is about five years if stored properly in a cool, dry place, unopened and undamaged. Once you open that puppy up, you have one to two years to use it before it goes bad in most cases.

Now, if you cook up some biscuits or flapjacks and don’t eat them, they will last a few days or a week at most if properly refrigerated. The shelf life of cooked, baked goods made with Bisquick depends on the stuff you use with it. If you put jelly jam on your pancakes, they won’t last 24 hours.

Alright, so we’ve been dealing in a lot of “ifs,” “almosts,” and “abouts,” so let us start dealing in absolutes – because when it comes to food that’s safe to eat, guessing isn’t the best policy.

Checking Your Bisquick for Freshness

If your Bisquick has been sitting in the cupboard for ages and ages, you may not feel like rushing out to the store to replace it. Maybe you’re short on cash or time. Perhaps it’s early on a snowy Saturday morning, and you’ve got hungry children eager to eat some delicious pancakes. Or maybe you’ve been locked in a bomb shelter after the world has been made unrecognizable by asteroids or nuclear war. Whatever the case may be, there are plenty of good reasons to hope your ancient Bisquick is still good.

Fortunately for you and all of humanity, you can pretty much count on your senses to tell you whether or not it’s okay to use your Bisquick mix. The important thing to do is to inspect it fully and completely.

Do not just look at the surface of a box of old Bisquick and judge it based on what you see. If you value your gastrointestinal health, what you should do is sift through it one cup at a time. Use a coarse strainer or sifter. Pour one cup of questionable Bisquick through it and inspect it both visually and by smell.

Inspect every bit of Bisquick that you intend to use carefully with your eyes and your nose. Hover over the powder as you pour it through your sifter and let the white, dusty cloud rise to your nose.

If you see any clumps or smell anything less than fresh, you should not use it for cooking. Otherwise, you should be fine to use and enjoy it.