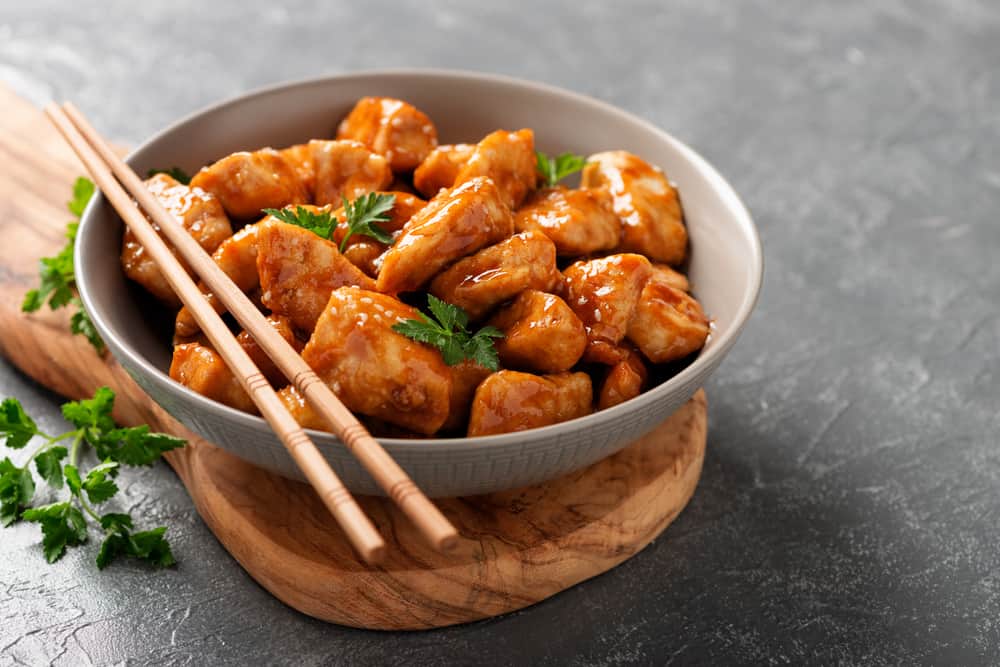 Both these Chinese-American foods are everyone’s favorite in the U.S. Surprisingly, Chinese people barely know that these meals exist. Read on to discover a comprehensive food guide and our favorite recipe for General Tso’s Chicken!

What Are General Tso’s Chicken And Sesame Chicken?

General Tso’s chicken, also known as General Tao chicken, is a juicy deep-fried takeout chicken coated with a very spicy and slightly sweet thick red sauce. It is served with boiled or steamed rice and vegetables like steamed broccoli or carrot. You will find this savory dish in every Chinese restaurant in North America.

People often confuse General Tso’s chicken with Sesame chicken since both meals look the same. But their sauces and ingredients make them uniquely different from each other.

Some people also use sesame oil or sesame seeds in the sauce. However, you can skip it to taste the original General Tso’s flavors.

Sesame chicken is a yummy chicken dish found in many Chinese restaurants in America. It has deep-fried, deboned chicken pieces coated with reddish-brown sauce and topped with sesame seeds. The sesame seeds may be toasted or not. You will find Sesame chicken sweeter than spicy, as it may contain honey. Sometimes,  it is served with baby corn, broccoli, and steamed or boiled rice. Being a sauce and Chinese-American dish, it is often confused as “General Tso’s Chicken.”

The ingredients of Sesame Chicken include (thigh) chicken meat, eggs and cornstarch (for batter), and sauce. The sauce perfectly combines vinegar, chicken broth, sesame oil, cornstarch, and sugar. If you live in  the United States, then you must know Americans have a soft spot for sweet things. So, adding honey, soy sauce, and ketchup to your Sesame Chicken sauce will let you enjoy a tempting flavor.

Peng Chang-Kuei invented “General Tso’s Chicken” in the 1950s to create a fancy dish that included chicken. He named the food after a 19-century Chinese military general, “Zuo Zongtang,” who was from Hunan province, the hometown of Peng.

Peng named the saucy chicken dish “General Tso” (the “T” in Tso is silent, which makes it sound like “Zuo/So”). He introduced this dish in the 1960s in New York. Henry Kissinger, United States Secretary of State, became a massive fan of this spicy chicken and the U.S. media  gave it massive coverage.

Eventually,   General Tso Chicken became a popular dish in America. So you can  call it a Chinese-American dish, but it is only a symbol of Hunan flavors and not originally from China.

How to Cook Perfect General Tso’s Chicken Every Time

Origin And History Of Sesame Chicken

You will have a hard time finding Sesame Chicken in China as the dish is originally American. But it does not mean that it’s not connected to Asia. Rumour has it that whoever created this dish was an Asian.

Although Sesame Chicken’s history is hard to find, the name of this dish assuredly comes from a must-included ingredient “Sesame Seeds”.

General Tso’s chicken has five distinct flavors derived from ginger, garlic, salt, tangy sauce, and spices. It has a crispy texture of chicken covered by a savory sauce to entice your taste buds. Sesame Chicken has a smooth, crunchy textured chicken underneath the sesame sauce that is more honey-like sweet than spicy.

General Tso has a red-colored and thick-textured sauce. Sesame chicken has a brown-colored, semi-thick, and sticky-textured sesame sauce.

General Tso may or may not contain sesame seeds (the basic version of the dish does not have sesame seeds or sesame oil in any way). If you are eating a saucy sour chicken with sesame seeds in it, it is perhaps General Tso. At the same time, you will always and always find sesame seeds in Sesame Chicken. Its sauce also carries the unique flavors of sesame.

You will often get General Tso served with steamed rice, broccoli, and carrots. Contrarily, with Sesame chicken, you will be served steamed rice and vegetables (only sometimes) like baby-corn and broccoli.

It is important that you know the nutritional-value your food provides. For instance, does it have a reasonable level of protein? Does it contain saturated or unsaturated fat? And most importantly, how does this food affect your health?

Sesame Chicken and General Tso’s Chicken may be the most flavorful dishes you’ve ever had, but do they deliver the same level of nutrition?

Here are the nutrition facts of these crispy chicken dishes:

Don’t know what to cook for dinner? Here is the yummiest honey stir-fried Sesame Chicken recipe for you.

As you know, General Tso’s chicken contains a lot of calories which isn’t healthy for your body. So, here is a delicious recipe for General Tso that will set your stomach lighter.

It is not a healthy cuisine as this chicken dish is first battered and then deep-fried in oil. The calories from carbs and saturated fats muster up, which isn’t healthy.

Is Sesame Chicken good for you?

Yes. When served with fried rice and vegetables such as carrots, Sesame Chicken can be a healthy meal. It contains a health-giving amount of protein, fiber, carbohydrates, vitamins, and minerals.

Can you lose weight by eating Asian/Chinese food?

Yes, you can. Research shows that Asian people lose weight faster than Western people because they follow the whole grains, bean products, and vegetables dietary pattern, which keeps them whole.

What is the healthiest takeout food?

Grilled chicken parmesan, Baked potatoes, Steamed summer roll, Soft-shell taco or lettuce taco salad, Steamed vegetable dumplings are the healthiest takeouts. Have these light foods if you are on diet.

What Chinese food has the lowest calories?